Another week, another game of Naval War.

After last week's demo game focused on battleship action, another of our local players was interested in moving some warships around.
For this demo game, we ended up using my small collection of 1/3000 scale minis instead of the 1/1800 stuff I normally use. The smaller scale is quite a bit cheaper and more portable, and now I would find out if the game still plays as nicely as it normally does with the smaller models. 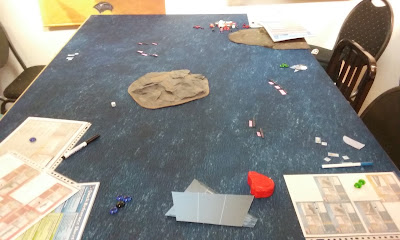 In this game, we were playing US Navy vs Imperial Japanese Navy, with both forces created from the Coral Sea order of battle. My opponent decided he wanted to use the Japanese, so I ended up commanding the Allied task force.
Here we can see the forces closing with each other at the end of turn 1. 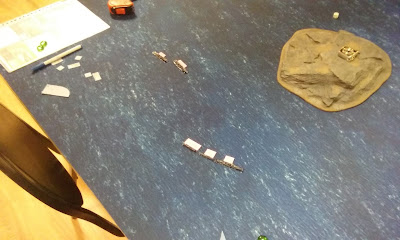 Here we have the US force, consisting of two squadrons.
The first, closest to the bottom of the picture, consists of heavy cruiser USS New Orleans and Farragut-class destroyers USS Dewey and USS Farragut.
The second, further up, consists of the heavy cruiser USS Northampton and the modified Leander-class light cruiser HMAS Hobart, attached to this task force by the Royal Australian Navy. 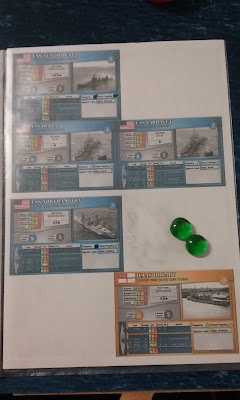 An overview of the ship cards.
Note that USS New Orleans is the flagship of her squadron and the overall fleet flagship while USS Northampton leads the other squadron. 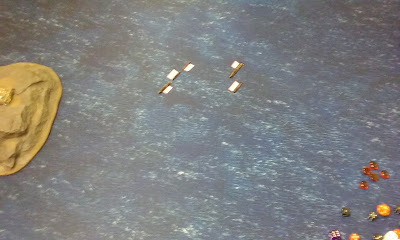 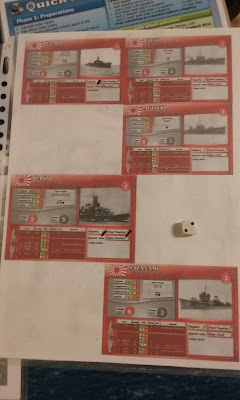 Kako is the fleet flagship and in charge of her squadron, with Yubari leading the other squadron. 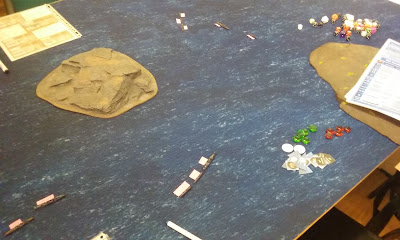 On the first turn, both sides successfully move all their ships forward at flank speed, heading towards a confrontation between the two landmasses.
This does leave the US two-cruiser squadron lagging behind slightly, because they were initially deployed to swing wide around the island and come up behind the Japanese.

This outflanking plan was discarded after remembering just how bloody fast the lighter of the two Japanese squadrons was.

The turn ends with some ineffective lobbing of eight-inch shells between New Orleans and Kako. 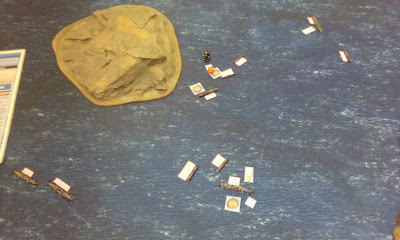 On turn 2, the US force wins initiative and the lead squadron positions itself to deliver maximum firepower to the fast Japanese squadron before they can get close enough to deliver their extremely potent torpedoes. 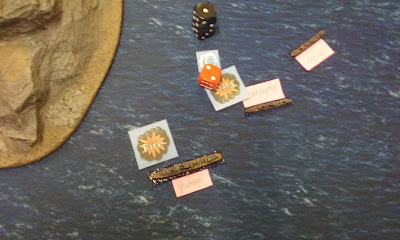 Initial hits on Yubari and Mutsuki are solid but not enough to finish them off.
The fires might cause serious issues if they're not repaired, though.

Mutsuki needs to take a command check to not break off from the fight, which she passes. 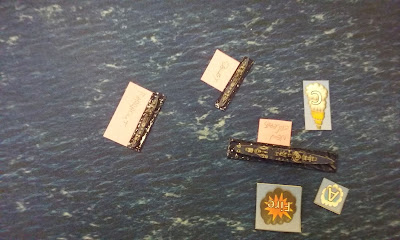 Meanwhile, Kako also scores some hits on New Orleans, which did have to expose her broadside to deliver maximum firepower. 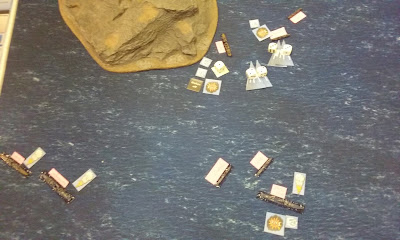 And then the torps are launched by Yubari and Mutsuki, a total of ten divided among four launches.

This leaves the forward US squadron quite concerned, though when Northampton and Hobart unleash their firepower, they at least manage to deal some more damage and start some flooding on Yubari.

Said damage also triggers a command check, which the cruiser fails.
This causes her to turn away from the battle, just barely avoiding the island in her movement, and breaks her out of the squadron. 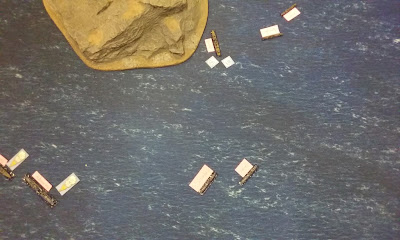 When the time comes for damage control, the IJN force manages to stop all the fire and flooding on Mutsuki and Yubari.
Yubari also rallies, allowing her to effectively rejoin the force on the next turn despite her now-impractical position.

The Japanese torpedoes get resolved at the end of the turn.
The ones heading for the US destroyers fail to hit their nimble targets, passing harmlessly by.
USS New Orleans, which had exposed her broadside, was far less lucky, with three of the four torpedoes going in her direction scoring hits.

The effects on the already-battered cruiser are devastating: she is simply obliterated.
Counting caused flooding, the amount of damage from those hits could have crippled another cruiser in addition to what was needed to finish USS New Orleans off.

This leaves the Allies in a rather uncomfortable position: their two destroyers are now somewhat isolated up front and their fleet flagship is gone.
The one upside is that the destroyers might be in a good position to launch torpedoes against the Japanese vessels next turn. 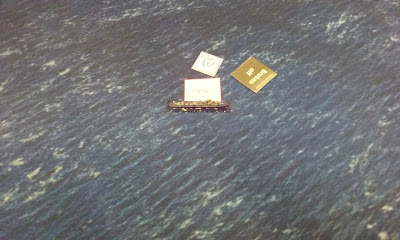 As the US destroyers charge forward to deliver their torps, Kako and Sazanami open fire on USS Dewey and deal significant damage, forcing her to break off and leaving USS Farragut truly alone right in front of the IJN force. 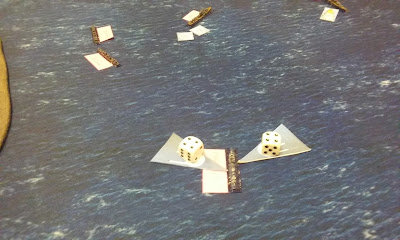 Which means it's time for a desperate torpedo launch in the hopes of actually hitting something! 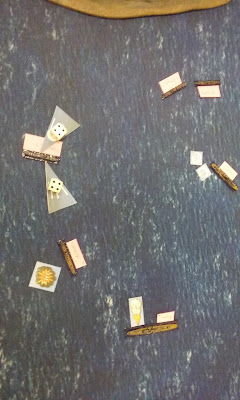 Of course, the rather battered fast group (of which Yubari has now been crippled by accurate fire from USS Northampton) manage to go to flank speed properly and vacate the threatened area.

Kako and Sazanami, on the other hand, can't really get out and go for the confrontation instead.

Quite a bit of gunfire is also thrown around, with USS Farragut dealing some damage to Sazanami and causing a fire on her. She herself takes some hits in return, though. 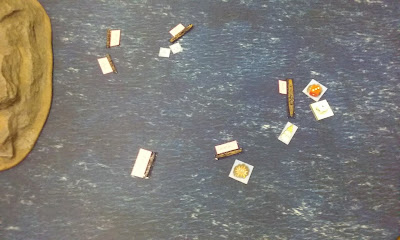 The four torpedoes headed towards Sazanami all miss, but two do strike Kako, dealing significant damage.

The next turn is incredibly tense, with multiple warships requiring only one or two good hits to be sunk. However, despite a number of hits on those ships, only one ship ends up taking real damage: USS Farragut, charging forwards with all guns blazing but failing to sink Yubari, takes some more damage and flooding that ensures she will sink by the end of the turn.

Along with USS Dewey failing to rally and the loss of USS New Orleans, that means the American side has less than half of their victory points left.

This triggers a command check, which I pass, giving me one more turn to maybe deal some damage before the battle ends and my surviving forces retreat in good order.

The final turn has some more maneuvering and a few long-range volleys trying to finish off damage ships, but to no effect.

Overall, I'd call this a tactical victory for the Japanese: the Allies did not lose all of their assets, but that sunk CA in particular does hurt. Some damage was inflicted in return, but the only ship that will probably be out of the fight for long is Yubari.

This was quite an interesting game that got quite tense later on in particular, when several vessels were just a hair's breadth away from being sunk.
In fact, most of them did take some hits but managed to pass their armour rolls.

My opponent also enjoyed it quite a bit and is interested to play some more in the future.

If there's one thing I can take away from this it's that one should not underestimate the speed and torpedo threat ranges of destroyers and other small ships; I apparently forgot about that after experiencing the joys of battleships.
Of course, that means I should probably try to get Force Z on the table sometime soon for that interesting mix of battleship/battlecruiser with destroyer support.

As for the experimental factor of using 1/3000 scale ships instead of my usual 1/1800: things worked perfectly fine without any rules alterations whatsoever, which was really nice to see.
This means I might end up doing more 1/3000 scale stuff in the future, though I probably won't abandon 1/1800 scale forces entirely.
It also leads to some interesting questions about the scale I wanna do aircraft in.

Naval War is a free living ruleset (which means it gets regularly updated to correct errors and clarify issues) that can be found at https://www.naval-war.com/.

If this seems interesting, do head over there, grab the rules and get some ships (or even just printed tokens to represent them) and head into the fight.
We in the community also really enjoy reading about your experiences with the game, no matter how glorious or horrendous they may be.
Posted by Marqod at 3:43 AM